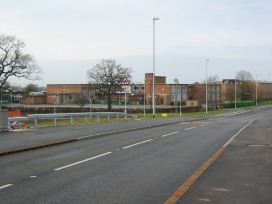 The parish of Rope covers an area of 471 acres (192 Hectares). About 40% mainly in the northeastern corner of the parish, has been built upon. There are about 800 households. There are forty named roads. It has two wooded and night-lit linear walks. There are three play areas in the parish. These are for the benefit of our energetic younger generation and not just green open spaces. The area is quite well wooded with at least thirty preservation orders on some of the older trees.

The Crewe-Shrewsbury railway line and Rope Lane separate the built-up area from the other 60% of the parish.
The farmland here is divided among the four farms in that area and one not resident in Rope. In this area are also the High School (called Shavington although it lies in Rope) and the Sports Centre which Rope Parish Council uses for its meetings. There is also now a four-lane by-pass. There are a number of ponds, all in private ownership. Three streams cross the parish. Swill Brook is the only one named on modern maps. The one east of Swill Brook was named Roope Sike on an old map which is now lost. Roope Sike runs along one of the linear walks. The stream west of Swill Brook, which flows through fields and near to Rope Hall, appears never to have had a name. There are three footpaths in the parish.